The Remutaka Conservation Trust Kiwi Project is now in its 16th year with a trapping and tracking volunteer base of over 90. The initial plan was to move a group (about 10 birds initially, in pairs) of North Island Brown kiwi from captivity in other locations nationwide to a 1000 hectare, predator-controlled site in the Remutaka Forest Park to establish a viable, self-sustaining Kiwi population.

Work began on the stoat-trapping network in 2003 and the first 6 kiwi were released into the park in May 2006.

Following our successful adult kiwi translocation from Little Barrier Island in April 2008, when 20 additional Brown Kiwi were added to our growing  population, the number of adult and juvenile kiwi roaming the Turere and Whakanui Valleys has now reached over 130, with several chicks hatched recently in the Park itself and many more chicks hatched from eggs laid by our kiwi from earlier releases at Pukaha Mt Bruce and Rainbow Springs. These birds are all being  returned to the Park.

Now more than half the birds in the Remutaka Forest Park have been born and raised in the Park!

Two of the older birds from the original release  (Koniwi and Milo) subsequently died of natural causes, but many new chicks have been successfully hatched from eggs laid and incubated by four of our founding population of kiwi pairs and several other of the translocated Little Barrier Island pairs.

At least four birds, Fern, Billy, Otautahi and Waikiwianui, were savaged and killed by dogs. (See our Kiwi Avoidance Training page to learn how you can get your dog trained to avoid kiwi).

Despite the losses to dogs, the Turere release area has proved to be an excellent foraging and breeding habitat for kiwi survival!

The initial (stoat trapped) Turere catchment release area was over 1000 ha in size, the minimum considered necessary for a self-sustaining population of brown kiwi.

Additional trap lines have since been extended into large areas of native bush bordering the original release area,  providing plenty of  space for the inevitable dispersal of our birds as the population increases. The trapped areas now extend over 7000 hectares.

The humane Doc 200 and 250 kill traps are checked fortnightly in the summer and monthly in the winter. Peak season for stoat population is Jan/Feb when the kits are leaving the nest and dispersing.

Hundreds of self-setting stoat and possum traps have also been deployed in recent months.

While fully grown brown kiwi (birds over 1200 grams) are capable of defending themselves against attack by stoats, their eggs and young chicks are vulnerable.

A robust predator control regime that includes an extensive boundary buffer and internal stoat trapping programme, along with continued monitoring of the brown kiwi population, will minimise the threat to young kiwi.

Because there is a problem with rabbits and hares in the Catchpool Valley and Orongorongo Valley, we have grave fears that eventually we will be visited by ferrets - which are much larger and even deadlier to adult kiwi and chicks than stoats, so we have recently deployed some larger (DoC 250) ferret traps as well.

If you would like to Sponsor a Trap and help save our kiwi and their progeny in the future, please click here!

Manaia's egg is seen here in her burrow before removal for further incubation and hatching at Mt Bruce.

The Kiwi Project has the support of so many people...

The Remutaka Conservation Trust Kiwi Project has certainly captivated the hearts and minds of a very broad cross section of our local community, schools and iwi!
Additionally, we have enjoyed substantial support and encouragement from The Bank of New Zealand Kiwi Recovery Programme (Now Kiwis for Kiwi), The Department of Conservation (DoC), Microsoft, Pub Charities, Hutt Mana Trust, The Wainuiomata Marae, The Wainuiomata Development Committee, Wellington Community Trust, Forest and Bird Society of NZ and many, many others. 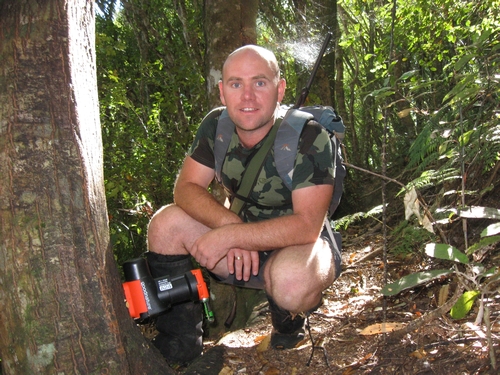 Robbie van Dam, Design Director of Goodnature Traps, checking one of his test lines of A24 and A12 self-setting traps on the ridge above the Sunny Grove/ Whakanui Tracks. Goodnature conducted extensive testing of both traps and long-life lures in the Remutaka Forest Park. The Remutaka Conservation Trust has now deployed hundreds of these very effective - and humane - kill traps.
Photo credit: PC

Trapping stoats, rats, hedgehogs, feral cats and possums has been essential prior to and following the release of our Kiwi.